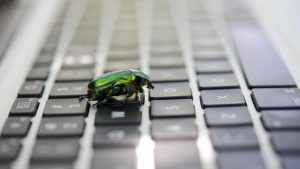 So Grace Hopper is considered one of the first programmers in the world: she worked on the computer of Mark I, the former, in fact, a giant calculator. The giant Mark I was intended for the computational processes of obtaining artillery ballistic tables, in the already written algorithm, mathematical tasks (modules) of a general nature were provided. Hopper and her colleagues (by the way, there were much more female programmers involved in coding than men) coped with this – they first applied subprograms.

This word then meant multiple repetitions of the same computational operations, and if programmers needed routines written before someone else, they simply rewrote the code to their notebooks. So although the term “subroutine” was introduced later, it is believed that for the first time this definition, without which there is no way to program, began to be used on the Mark-1 machine in 1944. And a year later, Hopper and her fellow programmers introduced another fundamental concept that all programmers in the world have to resort to today. His story is … It was a hot summer day. Mark I calculated tables with amazing machine speed – one table per day, and this was already great progress. It only remained to change the parameters by switching certain levers, and receive new data. The programmers relaxed, and suddenly there was a machine failure: Mark stopped rumbling and blinking lights. Everyone was at a loss, what was a mysterious malfunction in an already debugged mode. 4 hours after a thorough analysis, the programmers discovered a malfunction – it was a moth that closed the contacts of one of the relays. They carefully pulled out the body of the dead insect with tweezers and glued it into a special notebook that resembled a logbook, it was meticulously filled by order of the US Navy while the computer was working on the task. The insect remains were accompanied by the inscription:

After eliminating the “malfunction”, all those present exhaled and burst out laughing. Hopper said that when they heard homeric laughter in the engine room, an officer came in to supervise the entire floor on which the giant computer was located to find out what they were doing so funny. Programmers, choking on laughter, answered: debugging, that is, cleaning from insects. The term debug (or debug, as you like) has taken root, it began to be used to search for errors in the computer, and later in programs.

In general, parents seriously influenced the choice of the path of their eldest daughter. Grace probably inherited the analytical mind from her mother, who was fond of mathematics and, in particular, geometry. Despite the fact that at the beginning of the twentieth century everyone thought: this is not a female occupation. Or maybe even from my grandfather on the mother’s side got Grace “mathematical genes”! Her grandfather, John Van Horne, worked as the chief civil engineer in New York City. From the side of the father, with the score and with mathematics, there was also complete order. Both Grace’s father, Walter Murray, and her paternal grandfather were exchange brokers, whose brains made calculations faster than a computer, at that time, however, not yet invented. It was father who inspired Grace to go to Vassar College. This college is located near New York and in 1923, when Grace entered it, it was intended to teach girls the sciences and crafts. Although at that time, Americans still largely believed: this is not a female matter – science. Despite this common opinion, the “women’s” college of Vassar competed with the best universities in America, and the requirements for admission here were high. Grace, for example, became a student only on the second attempt, the Latin score in her graduation certificate was too low. In 1928, she graduated from Vassar College with a bachelor’s degree in mathematics and physics, and continued her studies at Yale, where she received a master’s degree in 1930. And after 4 years at Yale, Grace became a doctor of mathematics and returned to her alma mater, Vassar College, to teach. In 1930, Grace married New York University professor Vincent Hopper and changed her maiden name Murray to Hopper. Grace Hopper was a thin woman, one of those whose physique is sometimes jokingly called body subtraction. How do we know that? From quite official sources. The order, dated December 1943, to accept Grace Hopper as a volunteer in the reserve of the US Navy as an exception, has survived.