How does a computer affect a child? 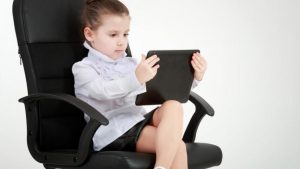 How often, remembering our childhood, we catch ourselves thinking that at the present time life is becoming more intense, richer, more active. Particularly acute is the lack of time and the desire to embrace the immense.

What can we say about the babies, to whose share it fell to be born in this difficult time, when the very concept of childhood changes, displacing our usual idea of ​​it. A variety of information is streaming onto the younger generation, the loads in schools go off the scale, and now we see a situation when the kids are already beginning to learn the computer almost from the cradle. What is it? The requirements of modern life or something else? Let’s try to figure it out together. There are both followers and opponents of computers for young children.

The advantages include: 1) visual perception of the proposed program; 2) the development of fine motor skills; 3) rapid assimilation of material; 4) the ability to generalize; 5) the development of memory and attention; 6) the development of hand-eye coordination; 7) the development of logic. But the biggest plus (and we don’t need to pretend that we adults never think about it) is an opportunity for us to entertain our baby with something. Many people buy computer games, even those that develop personality, replacing themselves with a computer in the life of a child. For a while, everyone is happy. The child does not mind being left alone with himself and his amazing toy, which step by step is becoming more and more significant in his life. Parents are given the opportunity to take care of themselves, their own affairs. After some time, adults begin to catch themselves thinking that their own child is moving away, does not hear their requests, does not listen to advice, ignores their presence. The toy completely captures the soul of a child, leaving nothing of that good and bright in it that we are trying to invest by all means. Is a computer so useful as we believe in it? Let’s take a look at the points. So, let’s start with visual perception. Yes, a vivid picture and moving objects are really capable of impressing and staying in memory for a long time, but only on the condition that there will not be too many such pictures. The desire to fill up the baby with new programs, so that he knows even more, can lead to the opposite effect: there will be no depth of learned material. The kid can perform tasks mechanically, following a given pattern. The development of fine motor skills. At the initial stage, yes. But the ability to press keys will not develop motor skills to the extent that ordinary pencils, pens and scissors could do. It’s no secret that the young generation, who switched to computers, completely forgot how to write. And fine motor skills, as you know, affects the development as a whole. Quick assimilation of the material – yes. But how long will this material last in memory? We say that memory itself develops faster, but will it not be short-lived?

You can argue a lot about computers. But the facts speak for themselves. American scientists have proved that children who spend a lot of time with a computer are significantly inferior to their classmates, who lead a more active lifestyle, according to the test results. In the West, the young generation has come to the conclusion that many have forgotten how to write, and to cut out a New Year’s snowflake has become an overwhelming problem not only for babies, but also for their young mothers! It is also undeniable that computer games make our children more nervous, exhausted and aggressive. We want to grow our children strong, successful, kind and attentive. But in order to grow a personality, it is necessary that with the baby there should be an equally strong personality, able to lead and teach life by example. No computer program can show so much love, understanding, generosity and kindness. An active lifestyle, reading books, visiting museums and exhibitions and the desire to be near, to be heard and heard – is this not the guarantee that our children will live happily in this real and beautiful world?

After some time, adults begin to catch themselves thinking that their own child is moving away, does not hear their requests, does not listen to advice, ignores their presence. The toy completely captures the soul of a child, leaving nothing of that good and bright in it that we are trying to invest by all means.