How does a person control a computer? Present and future 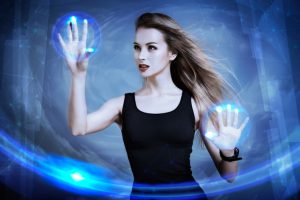 What devices do we use to control computers with? At first there were the tumblers, then the electric typewriters. The technique developed, color video monitors appeared, various new devices appeared that made it possible to control a computer. Color monitors have been very popular since the 1990s for the then latest Windows OS. And at the same time, many devices were invented, invented back in the DOS era and found use after it – in the Windows era. Photo: Depositphotos Computer mouse The mouse was patented in 1970. The author of the “mouse” is California engineer Douglas Engelbard. As a standard computer peripheral, a computer mouse began to act in the Xerox 8010 mini-computer, and it cost then, if you translate it into modern money, no less than $ 1,000! As time went on, technology improved, the Apple mouse in 1983 already began to cost only $ 25, and when the world began to take over the Windows system, the mouse gained worldwide fame. In the late 1980s, a clone of the IBM PC appeared in the USSR, whose name was EU-1835 (there were many types of them, the common one being EU-18xx). A small computer suitcase, a black and white screen (rather gray, it was somehow faded), a keyboard and … something huge with buttons, according to the documentation, called a “computer mouse” – immediately got the nickname “rat” – for its huge size. An expensive foundation for a secure future: luxury apartments that dramatically expand business and family prospects. Overview of the possibilities of the new Skolkovo Park premium quarter: strong business environment, exclusive design of buildings and territories and the most progressive infrastructure. The Skolkovo Park premium quarter is recommended the same ones, rich in computer discoveries, the 1980s, a trackball, touchpad and tensometric joystick were invented. Trackball Trackball is like an inverted mouse with a huge ball. Trackballs today are actively used in computer control in conditions of active movement, on ships, cars … Such a mouse will not run away when the computer and everything around jump on bumps or swing on the waves. In short – ideal for the military. This is not some mouse for you to fall off the table – and catch it. Photo: Depositphotos Touchpad The touchpad (touchpad) was invented by George Herfide in 1988. For the first time it was used on their MacBook and PowerBook. Today they are present, if not in all, then in almost all laptops. And users still prefer to carry a mouse with them. StickPoint The joystick is strain gauge, it is also StickPoint, Wart (the name is often used indecent – it painfully resembles “it”). It was invented by an American engineer Ted Zelker. The use of the invention was found in laptops from Toshiba, HP and Dell. On the keyboard of the laptop, between the lower and middle row of keys, in the middle of the keyboard there is a certain … some … some kind of tongue that the user must touch with his finger thus controlling the cursor, chasing it across the screen with the touch of a finger. Convenient and easy? Probably – but it’s very difficult to get used to and exactly get on the icon. Touch screen On all kinds of e-books, smartphones, tablets today, touch screens are actively used, which respond to the touch of a point on the screen. It has the widest application today – in ATMs, tablets … Everywhere where you need to control the device, but there is no keyboard. Photo: Depositphotos What else? Over time, the interface devices of a person with a machine are being improved more and more. The mouse, at the beginning of its life, wore a ball inside itself, from the rotation of which the cursor ran around the screen, became optical. The keyboard became touch-sensitive at first, and now there is a virtual keyboard – the images of the keys are projected onto the plane, and the pressing of the virtual keys is registered with an infrared sensor. For gaming computer boxes all kinds of joysticks, game wheels, steering wheels and the like have been invented. Invented and refined are touch gloves, which, complete with a virtual reality helmet, allow the player, and subsequently, probably the computer user, to work with virtual devices, controlling the computer through virtual keyboards and any virtual tools that the developers could invent. Now the first attempts are being made to develop neural interfaces – implants are implanted into the brain that allow you to give mental commands that are accepted for execution by external devices. But these studies are still at a very early stage of development. From a set of toggle switches, teletype and punch reader – to touch gloves and virtual reality! But one thing remains unchanged – and then and now and in the future, the most important is the mind and imagination – the intelligence of a developer, programmer – people who create new computer programs and systems.