Is it possible to create thinking machines? Alan Turing: Between the Past and the Future of Computer Engineering 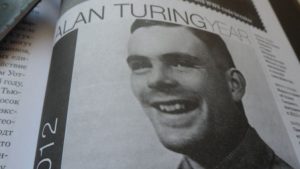 The second half of the twentieth and the beginning of the twenty-first century were marked by the heyday of information technology, which, beyond recognition, is changing our world. They change our way of life and behavior. Maxim Levin, personal archive More recently, computer system processors were manufactured according to the 32–38 nm process, now processors made using the 10 nm (nano-meters) technology are appearing. That is, Moore’s law is exactly fulfilled, which states that the number of transistors placed on an integrated circuit chip doubles every 24 months and not far from the day when the 0 nm limit is reached, the transistors will have to be placed at the atomic level. Already in full swing work is underway to create quantum computers and bioinformatics is developing. And by 2029, according to the famous inventor and futurologist Robert Kurzweil, the computer will be able to pass the Turing test. That is, a person talking in a written chat with an anonymous person and with an anonymous computer will not be able to determine which of them consists of flesh and blood, and which of microcircuits. Humanity will reach such a level of development of artificial intelligence systems that further acceleration of technological progress in this area will lead to the loss of human understanding in this area. Shot from the movie kinopoisk.ru Inhale and breathe: how to move to a more pleasant area of ​​St. Petersburg and not overpay We are looking for special offers for apartments to live surrounded by parks or to go to the bay without traffic jams Recommended Petersburg Real Estate Theoretical foundations of computer development existed back in the 30s years. But it was World War II that contributed to the emergence of such amazing scientific discoveries as nuclear power and computer. Great Britain was subjected to severe attacks by Nazi Germany by sea and from the air. In order to defeat a very powerful enemy, Britain had to attract the best minds of the country. In Bletchley Park there is an organization of cryptographers who work on the interception of Nazi reports. Among them was Alan Turing. He was involved in the development of the Colossus decryption machine. This led Alan to develop his first Pilot ACE computer. Here I would like to note the activities of the Cambridge intelligence group Philby and Blunt, who gave the decryption keys of the German Enigma encryption machine to the Soviet side, which had a significant impact on the course of the battle on the Kursk Bulge. Colossus decryption machine en.wikipedia.org What do we know about Alan’s life and work? Not to say that a lot. On June 2, 1912, Alan Matheson Turing was born in London. His parents – Julius Matheson Turing and Ethel Sarah Stoney – lived and worked in India. And only the birth of a child forced to move to London. Turing’s biography is very interesting and instructive, especially in terms of how he came to the issue of creating computers. I only note that in 1931 Turing became a student at the Department of Mathematics at King’s College, Cambridge University. Alan loved to play sports and devoted his free time to running and rowing. When he read the works of Neumann on the logical foundations of quantum mechanics and got acquainted with the works of Kurt Godel (1906−1978), devoted to incompleteness theorems, a scientist began to take shape in him who made a great contribution to the creation of the theory of computer science, or rather its theoretical foundations, when the computer not yet become part of human civilization. Or maybe it all started with the American ENIAC – a mastodon computer, which consisted of 18 thousand electronic tubes and weighed 27 tons, covering an area of ​​167 square meters. m? This computer was developed in 1946. Or is it plausible that everything began with the creation of machines in the 17th century, when Blaise Pascal and Gottfried Leibniz invented machines that could perform four arithmetic operations? And only in the twentieth century did Gottfried Leibniz’s dream come true with the advent of the theoretical foundations of Turing, which made it possible to create the first computer? ENIAC – the first general-purpose electronic digital computer en.wikipedia.org The fate of Alan is tragic. He lived only 41 years. In early 1952, Turing was arrested for indecent behavior, and then sentenced to forced hormone therapy. Alan fell into a deep depression and ate an apple poisoned with potassium cyanide. June 8, 1954 he was found dead. The works of Alan Turing did not lose their relevance, and many technical achievements were embodied thanks to his works. In conclusion, I would like to note that the death of Turing cast a shadow on all of humanity. Pessimists say: sooner or later, man will lose the evolutionary competition to robots. But what about the prophecies of the famous Edgar Cayce, who spoke about human life for 800 years? Such concepts as “spare organs”, “digitization of consciousness” and “life in a holographic body” gradually enter our consciousness. Let us remain optimistic and enthusiastic about the prospects of man, such as Turing was at the dawn of the computer era!