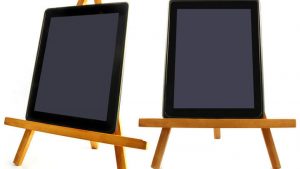 It would seem a banal question. But today, not everything is so simple: the boom on tablets does not subside, and competition is growing. Svyaznoy, for example, reports that tablet sales in Russia grew by almost 60% in the first quarter of this year (compared with sales in January-March 2013). So manufacturers, design bureaus and all those involved in the production of “tablets” try to please the customer in every possible way and invent something original, exclusive and progressive.

How different are tablets today and what can they be in the very near future? Eco-friendly and affordable The usual-looking tablet was created by Michael Castor based on the budget mini-computer Raspberry Pi Model B. This is a single-board computer with an ARM processor with a clock frequency of 700 MHz. The amount of RAM in such a computer is only 512 MB, and the operating system and data are stored on an SD card. Due to such a cheapened “iron” plus a case made of birch plywood, the PiPad tablet may in the near future become the most popular affordable device, among other things created from environmentally friendly material.

With non-standard dimensions Everyone is used to 7-inch, 7.85-inch and 9.7-inch tablet models. But bb-mobile offered a version of not quite standard dimensions. “Tablet” bb-mobile Techno 9.0 3G, as the name implies, is equipped with a 9-inch screen with a resolution of 1920 by 1280 pixels. The trick is that due to the aspect ratio of 16:10, like in a movie theater, the image on such a screen is about the same size as on the 9.7-inch. This is especially noticeable when watching a video – there are practically no frames at the top and bottom. But the tablet itself is much more convenient to hold, and it weighs less – 491 g versus 600-650 g for larger “tablets”. The bb-mobile Techno 9.0 3G tablet has already gone on sale and will cost 9,390 rubles today. Who knows, maybe the future is behind such non-standard models? Fading With the advent of flexible components for smartphones, the implementation of the concept of a flexible tablet seems to be a matter of the near future. So, last year PaperTab was introduced – a product developed for the exhibition by Intel and Plastic Logic. It can not only be bent or wrinkled, but the control itself can also be adjusted to the movement of the tablet. True, such a demonstration model functioned only in black and white (on electronic ink), but it had one more interesting possibility. When transferring files from one PaperTab to another, just put one device on another. Flexible technology for tablets is perhaps the most anticipated on the market and one of the most popular among developers.

Transparent Rumor has it that the sixth generation iPad will get a completely transparent case and display. But while such rumors are little justified, the designers from Israel really developed and presented a transparent, like a tear, tablet Grippity. Screen size – 7 inches, with two-way control. So the text, for example, can be typed with all the fingers of both hands. At the top, however, there is still an opaque part with function buttons. And Grippity runs on Android. And the price of such a tablet is expected to be quite affordable – about 160 dollars (5,600 rubles). Multifunctional No, it’s not even about banal 3G, GPS and other useful modules. The tablet, according to some developers, should bring real practical benefit. For example, warm dinner or beat eggs in foam. Wil Tsimenzin researched this issue, who created a concept tablet that does the housework. In addition to the listed “kitchen” functions, such a tablet will have the opportunity to come in handy in the repair process – drive a nail, tighten the screw. All thanks to the “physical” applications, elements that are bought and connected to the tablet. It would be nice, although such properties of the tablets seem to be the most unrealizable so far. What functions will be in demand in the near future, and which will remain fantasies anyway, is a matter of time. In the end, a lot depends on us, consumers. After all, manufacturers respond precisely to our inquiries. And what parameters, in your opinion, would be nice to get tablets?

What is a "computer generation"? Generation "2" and the following“If the aviation industry had developed as rapidly as the computing industry in the past 25 years, now a Boeing 767 would cost $ 500 and fly around the globe…