Will computers kill chess as a sport? 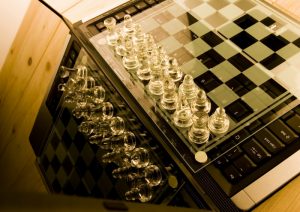 The question would seem to be simple, but finding the answer to it is not so simple. Let’s try to figure it out together. For centuries, chess has been a human game, but technology does not stand still. Mankind has long been trying to create an artificial brain in one sense or another of the word. The main task of this work is to teach the brain to think like a person. To do this, you need to come up with a methodology for checking “brain activity”, and according to programmers, chess is the best suited for this. Chess is a sport of the mind. Only the ability to think, think, analyze better (or, alternatively, in a different way) than your opponent does, will allow you to win. The first chess programs were very primitive. They evaluated which move would be the best in this situation, without having a common game strategy. This method of “thinking” usually ran counter to chess theory. On the one hand, a classical chess player familiar with the theory of chess initially found himself in an unusual situation – the computer does not play traditional openings. On the other hand, after playing several games, the man understood that the computer does not have a common strategy, and therefore it is quite easy to trap him. The chess programs of that time resembled a self-taught child who was shown how the pieces “walk”. Programmers took these comments into account, and after some time electronic chess players began to play traditional openings, began to consider options more deeply. Recall the confrontation between the machine and Garry Kasparov: if the first match was given to Kasparov quite easily, the second is gone. But Kasparov was playing with a supercomputer. Personal computers due to the then weak processor power were not so formidable rivals.

Now everything has changed. Modern processors have become more powerful. They use several cores, the size and speed of RAM also increased significantly. And the game algorithms have become more advanced. It became difficult to play against the car, and the match of Vladimir Kramnik is a confirmation of this. But such matches, in my opinion, are shows. You can watch it once because of interest. Even if the machine will consistently beat the world’s strongest chess players, it will not kill chess as a sport. Chess can kill the use of computers when people play against each other. Today it is no secret that in preparing for the game professional chess players use computers. And their technical capabilities are now such that in a short time you can calculate the entire batch from start to finish.

Of course, everyone is preparing for the upcoming game, and before the chess players calculated how they would play the opening. But they did it themselves – with their heads. Today, watching the game of the chess elite, we can see that sometimes until the middle of the game there is a play of homework. And, in my opinion, this is what leads to a decrease in people’s interest in this sport. There is no such heat as before. Cramming openings is what leads now to victory. Is there a way out of this situation? We can definitely say only that there will be no more chess that we loved in our time. There will not be those experiences that were throughout the past century. Chess has changed, as has our life. Chess has become faster and more technical, for some reason, FIDE functionaries believe that this way they became more spectacular. But there are things that should not change, in any case, so rapidly. Perhaps chess in its present form will remain like a game, but as a sport with such a development of technology, they can soon become obsolete. And perhaps chess will change. This idea was actively promoted by the eleventh world champion Robert Fisher, he proposed to draw lots for the position of the pieces on the board before each game. Thus, the possibility of homework is excluded and the rivals will compete, relying only on their own mind. This version of the game was called Bobby chess. Please note – he raised this issue in the 70s of the last century! Then this idea did not find support, and it was treated as a joke. But maybe it’s time to reconsider your views?