How do daddy kids with computers decide the future? 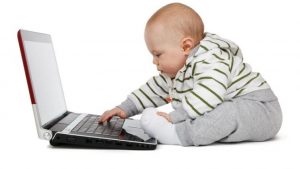 Dad, kids and computer. Why not “mothers, children and a computer”? Because mom has something to do in the house, and dad – not always. Most dads do not know how and do not want to do anything. They bring money. Moms tolerate any antics of dads for the money. If dad just lies on the couch, resting, then mom was lucky, this is the minimum evil.

And also because dad is power. Power in the house. And if there is no power, then there is no father. If the head of the family is mom, then dad is another child, and with a developmental delay. So, what happens in the house when there is a computer in it (almost everyone has it now)?

Father is working. Children at the computer. Dad is coming. Children pretend that they are doing their homework, sometimes they even do something for about ten minutes. Dad turns on his computer. Children know that this is for a long time, and turn on their own (if there is only one computer, then they can stand behind dad and actively communicate with him about the pictures on the screen, this is now called parenting). Dad recalls that it’s time for the children to sleep. Children crawl under blankets with tablets and look at the screen at an unacceptable distance well after midnight. If there are no tablets, then falling asleep, they continue to mentally play computer games. Improved in this and only in this. If dad discovers the tablet under the covers, he tears and tosses. Dad is scary in anger. Enraged can even eliminate the tablet. Once. The next day, it turns out that without a computer it is impossible to do homework. And that a child without a computer begins to demand attention. Week dad thinks. Then he goes and buys a computer better than before. And in the house comes peace. Peace lasts a long time. Children have time to get fat, get stupid, get myopia. Dad catches his head and starts a search for specialists who would solve problems. He searches for himself in the computer. Finds, pays, pays more and more. He hears explanations about the timing of problem solving. When deadlines come out, but problems are not resolved, changes specialists. Again, being advertised on the Internet. Children grow up without a father who is looking for something for them. Along the way, he finds something else and sometimes gets stuck in this other for a long time. Being distracted for minutes, loses days and weeks. And the children are growing up. And suddenly they are those who can no longer raise their voices. Soon, they find new ways to live, and dads can devote themselves entirely to wandering on the Web. Duty is fulfilled – children are grown. Some time passes, and dads discover that one-year-olds have grandchildren. Slowly the longing for his native, small, gentle, defenseless is growing. Years do their job, something like wisdom appears, and popes try to publish truths that they discover on the Web. But they get a rebuff. I want to leave my matured beliefs to the world, but nobody needs them. It becomes obvious that one must transfer his whole belief system to someone specific and start from childhood. If there are no grandchildren, you have to publish yourself on the Internet. More than 7 million new pages appear every day, but there are so many network users that each page gets a few views. And the old man rejoices that they see him, he hears. And he is trying, he is in a hurry to give his best while he is alive. Then it disappears. Children share the inheritance. Internet pages do not inherit, most often do not know about them. If they know, they are not proud, but ashamed. Children give grandchildren some special luck. If you give grandchildren to be raised, then this is a huge happiness. Grandfathers are engaged with children selflessly, and up to five to seven years old their children willingly obey. But on one far from perfect day, a dad with a box appears, the child sticks to the screen, and grandfather once and for all loses attention. What should he do from now on? Just grumble on the forums. To spit grudge against life.

Only twenty years (someone more, someone less) we live on the Internet, but there are already millions of fathers who have lost children on the Web. Every day brings hundreds of new grunts. Every day, the Network snatches hundreds of new kids out of reality. Grandfathers with their experience live in some parts of the Network, children in others. As if scattered on reservations. The outgoing generation is leaving. Together with acquired wisdom. There is nothing easier than eliminating the Internet experience of this generation. Young people are provided with spaces that are not clogged with the excessive culture of their ancestors. The consciousness of the young is created by the Internet, and this is a completely controlled process. Another twenty years, and the manuscripts of the ancestors will not be decipherable in the same way as the clay tablets of the Babylonians, because of the mental incompatibility of generations. Today’s popes could have prevented this if all together, in one day, removed computers from their homes. And they would become fathers of at least the 1975 model. But it will not be done.