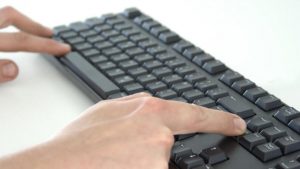 In the early 1980s, the company sold large computers (mainframes) to large customers: government, military, universities, research centers, large corporations. The orders were huge, the money from them went big. What is there to think about trifles, about some personal computers there! Is it possible to use them as smart terminals for mainframes? In 1975, the 5100 model computer was released, which was quite suitable for one person to work on it. It was a desktop, with a built-in black and white monitor, with a keyboard and a tape drive. A good candidate for personal computers, if not for the price – 20 thousand dollars. Great!

In the early 1980s, there were few players in the personal computer market. First, the pioneer of all “games” with personal computers, Apple with its Apple II system. It was followed by Commodore, Atari, RadioShack, and Tandy. They produced relatively cheap computers for radio enthusiasts, who got the main buzz from assembling this “fly bucket” with their own hands, and then having fun with simple funny games by connecting a gaming computer to the home TV screen and to a home cassette recorder. Since IBM saw the creation of small computers as a non-core burden, it was decided to bring the project to a reasonable end by a small team of engineers and programmers (12 people in total), united under the leadership of Don Estridge. It was assumed that if the company needed personal computers for something, their production could be “reset” to third-party companies. And therefore, in order to save time and reduce the price of the product, the designers made the most of “alien” developments. For the same reason, IBM, not at all a baby in the jungle of intellectual property protection, virtually abandoned licensing its own components and basic input / output system (BIOS). Let thousands of flowers bloom, let everybody clone an IBM PC! In the course of the design, small changes took place that determined – in high terms – the fate of mankind. Initially, it was assumed that the “brain” of the new personal computer will be the IBM 801 processor, which already had its own operating system. But then, Intel 8088 was chosen as the processor for a personal computer. It took a fast and cheap to develop an operating system for this processor. The small Microsoft company contracted to do this. This is how MS-DOS appeared, which Microsoft subsequently made its main product for several years, and thanks to which this baby with a staff of 30 people turned into an international corporation. Developers also saved time by using a ready-made monitor and printer. The monitor was developed long ago in the Japanese branch of IBM, and the Epson dot matrix printer was taken as a printer. The keyboard and monitor were not built into the computer, but were connected using a cable. This solution seems common now, but then it was new. The computer was designed and built in one year and one month. The first sample was released on August 12, 1981. One of the engineers on the team that created the IBM PC was David J. Bradley. In five minutes, he came up with a thing that everyone still knows. And, probably, they will know as long as PCs exist. Namely, a combination of three keys – Control-Alt-Delete, which forces the computer to restart without shutting down. Or, as they say, “make a hot restart.” The Bradley team was developing a basic input / output system (BIOS). This system started working immediately after turning on the computer. She checked the existence of various devices (monitor, keyboard, floppy disks, timer, etc.), after which she tried to load the operating system from a floppy disk, and if the download was successful, transferred control to MS DOS. This is the so-called “cold restart”, before which the computer did not work. Now the “cold restart” takes about 2 minutes, in 1980 – more than 5 minutes. When debugging, I had to restart and spend a lot of time looking at the black screen on which green letters run. To speed up the process of debugging the BIOS, Bradley made an additional entry point for the “hot restart” in the program, after checking all the turned-on equipment, where the operating system boot itself started. Thus, the reboot time was reduced by more than half. A hot restart was initially performed by simultaneously pressing the Control-Alt-Escape keys. Pressing these three keys simultaneously with the fingers of one hand is possible, but difficult. Practice, you will succeed!

What revolutionary computer novelty did the manufacturer prepare for release? SPACE LUMINAWe are witnessing the advent of a new computer era, the era of the so-called wearable technology. There is a super-miniaturization of computer devices. At the same time, the list…